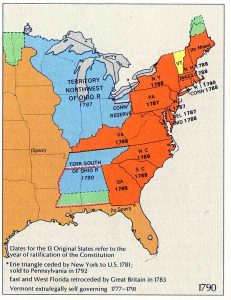 In the first year of his presidency, Washington sought to make himself more accessible to the people by undertaking grueling tours of every state in the union.  From October to November of 1789, Washington toured through the northern states and visited 60 cities on the way, feted everywhere by adoring crowds.  From March to July of 1791, traveled through the southern states and returned to the temporary capital in Philadelphia.  In undertaking these demanding trips over unpaved roads and varying climates, Washington hoped to foster national unity, understanding his own symbolic role, as well as ascertain the nuances of public opinion.  During Washington’s terms, Vermont, Kentucky, and Tennessee were added to the original thirteen states, reflecting ongoing American expansion.

Reflecting the broader contradictions of American and Native American relations, Washington had fought and allied with various tribes throughout his military career.  Washington sympathized with the natives in light of the rising level of encroachments by white settlers on Native American land and often sought to cultivate peace and gain recognition for the tribes as nations.  In the summer of 1790, Washington and Secretary of War Henry Knox invited over two-dozen leaders of the Creek nation, led by its charismatic leader Alexander McGillivray, to the then-capital New York City, and signed the Treaty of New York.  Still, Washington was willing to use force to punish more hostile tribes. 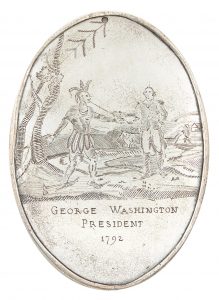 In the Northwest Territory, Indian raids had continued unabated since the 1780s.  Washington sent Major General and former Revolutionary War commander Arthur St. Clair to the territory, hoping to pacify the tribes, but on November 1791 the northwestern tribes inflicted a devastating defeat on St. Clair’s forces.  Out of a force of a thousand people, St. Clair suffered 952 casualties, the worst defeat United States forces would ever face against Native Americans.  Washington, reeling from the stunning loss, turned to another former Revolutionary War soldier, General “Mad” Anthony Wayne to punish the tribes.  After several months of unconventional training, Wayne scored a major triumph at the Battle of Fallen Timbers, near present-day Toledo, Ohio, in August of 1794.  The defeat and the resulting Treaty of Grenville in 1795 gave the United States command of much of present-day Ohio and parts of Indiana.

Washington, however, maintained friendly relations with other tribes, such as the Cherokees, and hoped that they would be granted territory that would permanently provide for their safety.  He hoped that eventually Native Americans would be introduced to the ways of agriculture and encouraged Christian missionaries to proselytize them.  Tragically, it simply proved impossible for the young American government to stop the explosion of Western settlement.  It would be Thomas Jefferson who would inaugurate a new policy towards the natives: removal.

The Hamiltonian economic system would require new taxes on the American people.  In 1791, the federal government passed excise taxes on distilled spirits, which hit many farmers and white settlers particularly hard.  In the rough, undeveloped western territories, alcoholic beverages, such as whiskey, often served as currency and tax collectors were soon met with strong resistance.  By the summer of 1794, thousands of dissidents in western Pennsylvania were gathering and openly discussing a seizure of the federal garrisons and a tax collector’s house was burned down.  To these farmers, the excise taxes were reminiscent of the oppressive taxes of the British crown that sparked the American Revolution.  For many Republicans, the reaction against the taxes and Hamilton’s plan was merely a continuation of the spirit of 1776.  For Washington and most Federalists, the threatened revolt was no less than an assault on the legitimate authority of the Constitution, thus endangering the fate of republican government itself.  In Washington’s eyes, the taxes were legitimately passed by the mechanisms of the Constitution and, therefore, must be obeyed by every citizen.  Washington wrote, “If the laws are to be trampled upon with impunity, and a minority (a small one too) is to dictate to the majority, there is an end put, at one stroke, to republican government.” 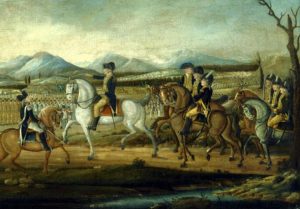 President Washington commanding the troops on his way to Pennsylvania during the Whiskey Rebellion, Source: Metropolitan Museum of Art

Although alarmed by the rebellion’s dire implications, Washington moved with prudence.  Washington again sought the advice of his cabinet and also turned to Supreme Court Justice William Wilson on the constitutionality of the president calling the militia.  He asked the Pennsylvania officials to take the lead in suppressing the revolt, but after they were hesitant to respond, arranged for Secretary Knox to call up the militias of Pennsylvania, New Jersey, and Virginia.  Still hoping to avoid a military confrontation, Washington sent a two-man commission to the rebels and then issued a final warning in September 1794.  Secretary Knox had taken a leave of absence to deal with personal issues, so Washington and Hamilton rode out together to Pennsylvania and Washington became the only U.S. president to ever personally command the troops on the field.  Washington and Hamilton commanded a force of thirteen hundred to confront about six thousand rebels.  The rebels eventually backed down and Washington graciously issued pardons for the rebel leaders (the first presidential pardons in American history).

Washington’s response to the Whiskey Rebellion was a success.  Ultimately, Washington’s measured approach upheld the supremacy of the Constitution and proved that the republic could enforce compliance of its laws while avoiding more heavy-handed tactics.  He worked very hard to ensure minimal violence and loss of life while maintaining a firm hand.  Republicans, however, saw Washington’s actions as unnecessarily suppressive and stoked fears of military rule.  The controversy added to the rift between the Federalists and Republicans.

In addition to avoiding war with England, Washington’s envoy Thomas Pinckney successfully negotiated the Treaty of San Lorenzo with Spain, opening up American navigation in the Mississippi in 1795.  Additionally, the Treaty of Tripoli was signed in 1796 with the Barbary states.  Both treaties would help pave the way for the thriving of American commerce.