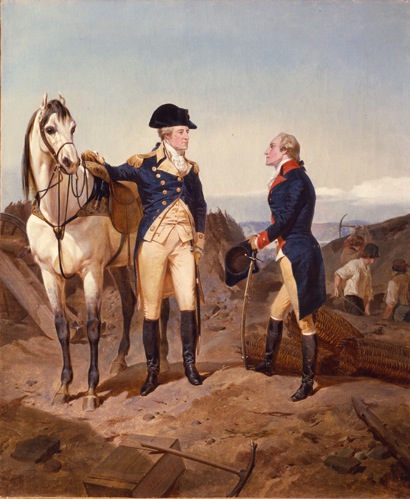 Washington’s relationship with Hamilton spanned almost a quarter of a century.  During that time they collaborated on the major events of the Founding era: the war, the Constitutional Convention, and the first American presidency, and even worked together during retirement.  During the war, Hamilton was Washington’s his aide-de camp and boy wonder, but his superior abilities made him a virtual chief of staff.  As president, Hamilton turned his position as Treasury Secretary into a virtual prime minister of the national government.  Washington and Hamilton’s productive relationship had much to do with their complimentary abilities.  Washington possessed irreproachable integrity and superb judgment while Hamilton possessed spectacular intellectual breadth.  Hamilton clearly was the more intellectually superior of the two, but at times had poor judgment.  Washington was one of the least educated of the founders, but was gifted with wisdom and discernment.  They both differed in temperment as well.  Washington was taciturn and circumspect, Hamilton was brash and arrogant.  Both men were proud, vain individuals, but Washington was blessed with tact that allowed him to rise above politics, something Hamilton could never achieve.  Although their relationship was strained briefly in the years of the revolution, partly due to Washington’s refusal to assign Hamilton a field command, their generally compatible political views led to a sincere affection that lasted until Washington’s death.  In the end, Hamilton outlasted Madison and all others to become Washington’s most trusted adviser and confidant.  Washington depended on Hamilton’s advice to the end, consulting him on the Jay Treaty and his farewell address and insisting that Hamilton head up the makeshift army in the face of threatened war with France under the Adams Administration.  As Washington would write that Hamilton had been “the principal and most confidential aid of the Commander in chief.”  He added, “that he is ambitious I shall readily grant, but it is of that laudable kind which prompts a man to excel in whatever he takes in hand. He is enterprising, quick in his perceptions, and his judgment intuitively great.”  Below are a few quotes from Hamilton reflecting their long-time collaboration.

Letter to Elias Boudinot after the Battle of Monmouth, June 1778

“His coolness and firmness were admirable.. [H]e directed the whole with the skill of a master workman.”

“For three years past I have felt no friendship for him and have professed none. The truth is our dispositions are the opposites of each other and the pride of my temper would not suffer me to profess what I did not feel.”

“The great man and I have come to an open rupture… He shall, for at least once, repent his ill-humour.  Without a shadow of reason and on the slightest ground, he charged me in the most affrontive manner with treating him with disrespect.”

“The voice of praise would in vain endeavor to exalt a character unrivaled on the lists of true glory. Words would in vain attempt to give utterance to that profound and reverential grief which will penetrate every American bosom and engage the sympathy of an admiring world. If the sad privilege of preeminence in sorrow may justly be claimed by the companions in arms of our lamented Chief, their affections will spontaneously perform the dear though painful duty. ‘Tis only for me to mingle my tears with those of my fellow-soldiers, cherishing with them the precious recollection that while others are paying a merited tribute to “The Man of the Age” we in particular, allied as we were to him by a closer tie, are called to mourn the irreparable loss of a kind and venerated patron and father!”

“Sir: – The death of our beloved Commander-in-Chief was known to you before it was to me.  I can be at no loss to anticipate what have been your feelings.  I need not tell you what have been mine.  Perhaps no friend of his has more cause to lament on personal account than myself.  The public misfortune is one which all the friends of our government will view in the same light.  I will not dwell on the subject.  My imagination is gloomy – my heart is sad.”

“Perhaps no man in this community has equal cause with myself to deplore the loss.  I have been much indebted to the kindness of the General, and he was an Aegis very essential to me…  If virtue can secure happiness in another world he is happy.  In this the Seal is now put upon his Glory.  It is no longer in jeopardy from the fickleness of fortune.

In The Public Conduct and Character of John Adams, esq., President of the United States, October 24, 1800

“He consulted much, pondered much, resolved slowly, resolved surely.”