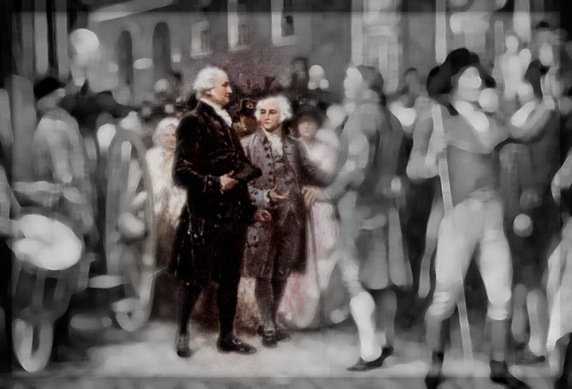 Washington and Adams during the 1793 Inauguration

In many ways, the complex relationship between our first and second presidents reflect their highly contrasting natures.  Although they often found themselves on the same side of history, as revolutionaries and as Federalists, Washington was stoic and tactful while Adams was hot-headed and opinionated.  While Washington’s gravitas and air of dignity commanded respect and awed observers, Adams turned many off with his irritability and obstinance.  While Washington was known as the foremost character of his age, Vice President Adams was the butt of jokes.  When presiding over the Senate, Adams was referred to as “His Rotundity.”  The contrast would often bring out Adams’ insecurities and his jealousy of Washington.

From the beginning, Washington and Adams were natural allies.  At the First and Second Continental Congresses in 1774 and 1775, John Adams emerged as the fiery leader of the Massachusetts delegation while Washington remained the reserved, dignified delegate from Virginia.  As Adams pushed for a unified war effort amongst the colonies, it became clear by the summer of 1775 that a commander would be needed in the field to defend against the British in Boston.  Adams, sensing Virginia’s importance as the most populous colony, moved on June 15, 1775 to nominate his Virginia colleague Colonel George Washington as commander-in-chief of what would become the Continental Army.  Washington was confirmed unanimously.  It was a fateful moment in both men’s lives, as it would catapult Washington as the symbol of the American cause and move the Congress towards Adams’ ultimate goal of independence.  It was also indicative of the delegates’ desperation, as very few in the colonies had any semblance of military experience equal to the task.  In a sense, Washington was the only possible choice.  Regardless, Adams played a crucial role in Washington’s advancement.

During these days, Adams was full of effusive praise for his nominee.  He had written, “Colonel Washington appears at Congress in his uniform, and by his great experience and abilities in military matters is of much service to us.”  After Washington accepted the command and insisted to serve without pay, Adams remarked, “There is something charming to me in the conduct of Washington.  A gentleman of one of the first fortunes upon the continent, leaving his delicious retirement, his family and friends, sacrificing his ease and hazarding all in the cause of his country.”

As the war dragged on, Adams continued to publicly support his choice, but he began to resent Washington’s status.  Eventually Adams’ envy of Washington would lead him to center around one theme: Washington was overrated.  He claimed that Washington’s errors had been glossed over and his praises had been over-sung.  Adams claimed that everyone “expressly agreed to blow the trumpet of panegyric in concert to cover and dissemble all faults and errors; to represent every defeat as a victory and every retreat as an advancement to make that character popular and fashionable with all parties in all places and with all persons.”  Adams slighted Washington’s success, arguing that it was largely attributed to merely his physical appearance and fortunate marriage to Martha Washington.  “Virginia geese are all swans” he would later write sarcastically.  Most scathingly, Adams would disparage Washington’s lack of education, describing him as “too illiterate, unlearned, unread for his station and reputation.”

At any rate, after the war Washington and Adams would rise to the pinnacle of political power, with the former chosen as the nation’s first president and the latter as vice president.  Still, it seemed that Washington’s fame came at Adams’ expense.  Preempting any attempts to embarrass Washington in the 1789 election, Alexander Hamilton privately lobbied several electors to withhold their votes for Adams.  Although Adams did not know until several years later of Hamilton’s schemes, he felt humiliated by his showing.  Adams’ term as vice president under Washington wouldn’t get any better.  Washington rarely consulted Adams, relegating him to insignificance, thereby inaugurating a long-standing tradition of vice presidential irrelevance.  “My country, “Adams would glumly write, “has in its wisdom contrived for me the most insignificant office that ever the invention of man contrived or his imagination conceived.”

While Washington remained above the fray, Adams would be embroiled in seemingly-petty debates in the Senate about the proper title for the president.  Still, Adams remained loyal to the President, casting twenty-nine tie-breaking votes in the Senate in favor of the Administration.  Adams was rewarded as the Federalist nominee and eventual successor to Washington as the second president of the United States.

In the years after Washington’s terms, America’s first two presidents would be embroiled in a painful impasse.  It didn’t help that Adams had the unenviable task of succeeding the revered Washington at a time of national division.  As Jefferson had predicted, “President [Washington] is fortunate to get off just as the bubble is bursting, leaving others to hold the bag. Yet, as his departure will mark the moment when the difficulties begin to work, you will see, that they will be ascribed to the new administration.”  The two party system was up and running and Adams was caught in the middle, taking fire from both sides.

Adams, in response to the threat of war with France, had began marshaling the forces of the country and appointed Washington to head the new army.  Although Washington had corresponded with Adams about the possibility of serving again, Adams had not informed him of the decision, much to Washington’s consternation.  Also, Washington insisted that his trusted confidant and adviser Alexander Hamilton serve as second-in-command, which would effectively mean Hamilton would be de facto commander.  Adams was horrified at the thought, as he absolutely despised Hamilton and considered him a dangerous man.  Eventually, Adams would achieve peace with France and disband the army, but his rift with Washington would never be healed.  Both men’s destinies were intertwined by war and revolution and both had emerged as the premier American statesmen in the aftermath of independence.  However strained and complex their association was, their patriotism and like-mindedness determined the course of the early American republic.