Home  »  His Career  »  The Statesman  »  Second Term – Election and Inauguration

Washington had grown weary of the attacks on his administration and genuinely longed for retirement at his beloved Mount Vernon estate.  He had originally desired to serve for only two years, hoping to retire once the government was up and running.  Now he had hoped to leave when his term expired in 1793 and even asked Madison to draft a farewell address.  By the end of his first term, perhaps the only thing that either side could agree upon was that the nation needed George Washington to remain as president.  Jefferson told the president, “North & South will hang together if they have you to hang on.”  Hamilton wrote to him that to retire would be “the greatest evil that could befall the country at the present juncture.”

Even by November of 1792 Washington vacillated on whether to stand for re-election.  Washington still mused about retiring.  However, upon receiving a letter from a close friend named Eliza Powell, he appeared convinced that his honor and the fate of the nation rested upon his accepting the call to service once again.  Washington again won the unanimously; all 132 electors voted for his re-election.

March 4, 1793, at the Senate Chamber of Congress Hall in Philadelphia, Washington was sworn in for his second term.  In perhaps an expression of Washington’s preference to retire, he then delivered what still stands as the shortest inaugural address in American history:

Fellow Citizens: I AM again called upon by the voice of my country to execute the functions of its Chief Magistrate. When the occasion proper for it shall arrive, I shall endeavor to express the high sense I entertain of this distinguished honor, and of the confidence which has been reposed in me by the people of united America.

Previous to the execution of any official act of the President the Constitution requires an oath of office. This oath I am now about to take, and in your presence: That if it shall be found during my administration of the Government I have in any instance violated willingly or knowingly the injunctions thereof, I may (besides incurring constitutional punishment) be subject to the upbraidings of all who are now witnesses of the present solemn ceremony. 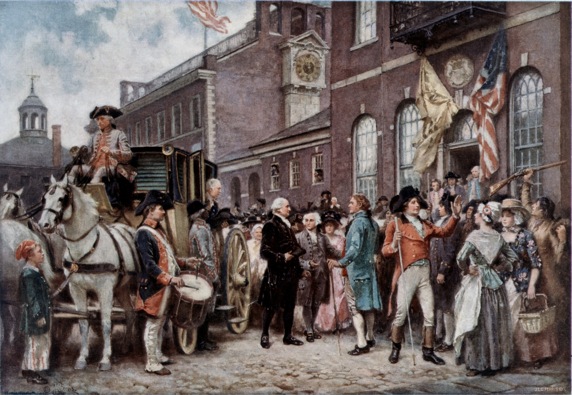 Washington with Adams and Jefferson as he arrives at his second inauguration, Source: Library of Congress

In many ways, Washington’s second term would prove more difficult than the first.  In part, this can be attributed to the decrease of quality in Washington’s cabinet.  Jefferson would retire at the end of 1793 and Hamilton by January of 1795.