In order to fully appreciate Washington’s presidency, it is imperative to examine the context within which it took place.  The “president” existed only in constitutional theory and debate.  Never had such an office been conceived (previous “presidents” of the congress merely presided over legislative sessions with no real executive power), not only in America, but throughout the history of mankind.  Article II of the Constitution, sketching out the executive branch, was relatively brief and left much to be determined by future occupants.  It fell upon Washington to, not only make the office itself a reality, but to create the institutions for the infant republic.  The first major achievements of the Washington Administration largely consisted of legislation to do just that:

The greatest controversies in Washington’s first term centered around Treasury Secretary Hamilton’s proposals to restore American finance.  The new republic faced an enormous total debt of $79 million dollars ($54 million in national debt and $25 million in state debt) inherited from the Revolutionary War.  During the war, both the feckless Continental Congress and the states could not or refused to levy taxes and thus resorted to borrowing and printing money, resulting in massive debt, inflation, and economic depression.  However, that debt was unevenly spread throughout the nation, as the northern states took on the heavier burden of the war effort.  As commander, Washington lamented the inability of the states and the national government to raise the necessary funds to feed, equip, and pay the army and believed that a strong, central government would have allowed for a more effective prosecution of the war.  Thus, he was predisposed towards such a government to restore American finance.

In January 1790, Hamilton submitted his First Report on the Public Credit to Congress, which immediately sent shock waves throughout the political and economic world.  In his report, Hamilton laid out an ambitious plan, patterned off of both British and French finance, in which the national debt (including state debt) would be completely assumed by the new federal government and utilized for the purpose of building American credit.  The complex “assumption” plan would advocate full repayment of all outstanding debt to current bond holders, without discrimination to the original holders (which infuriated many, since many of the original holders were impoverished Continental Army soldiers).  A series of tariffs and excise taxes would provide federal revenue, and a sinking fund would be established which would be dedicated to paying down the national debt.

The assumption plan, in all its complexity, was destined either to inspire awe in its supporters or provoke outrage among its critics.  To detractors, Hamilton was creating just what the founders had feared the most: a strong national government, reminiscent of British crown, with supremacy over the states.  Additionally, it would pave the way for rampant corruption as it rewarded speculators over patriotic soldiers.  Lastly, the plan divided the nation as it favored sectional northern interests over the South.  In essence, it appeared to be the epitome of what the states fought against in the War of Independence.

This first controversy would define the divisions within the early government and give rise to the First Party System in America.  In a sense, it was the opening salvo in the battle of constitutional interpretation that goes on to this day – a debate about the proper relationship between the national government and the state governments and about the proper level of federal intrusion into the economy.  Both Jefferson and Madison opposed the plan and Madison offering his own financial proposal that provided for the original holders of the bonds to be paid.

In the end, the impasse was finally broken in June 1790 when a serendipitous encounter between Hamilton and Jefferson outside Washington’s executive residence led to a famous dinner that also included James Madison.  At that dinner, a compromise was fashioned: Hamilton agreed to support a national capital on the Potomac near Virginia in exchange for Jefferson and Madison’s acceptance of the assumption plan.  Washington, respecting separation of powers and wanting to remain above the fray, did not inject himself into the political debate, but his inclinations towards a strong central government aligned with Hamilton’s overall plan.  Also, since Washington believed that the War for Independence was a joint effort and, thus, the debt was a joint responsibility, he believed that the assumption plan was a legitimate means to handle the debt.  By July the deal was completed, as both the Residence Act, designating Philadelphia as a temporary capital and the Potomac as the permanent capital, and the assumption bill were passed.  It would prove to be just the beginning of Hamilton’s political ascension under Washington. 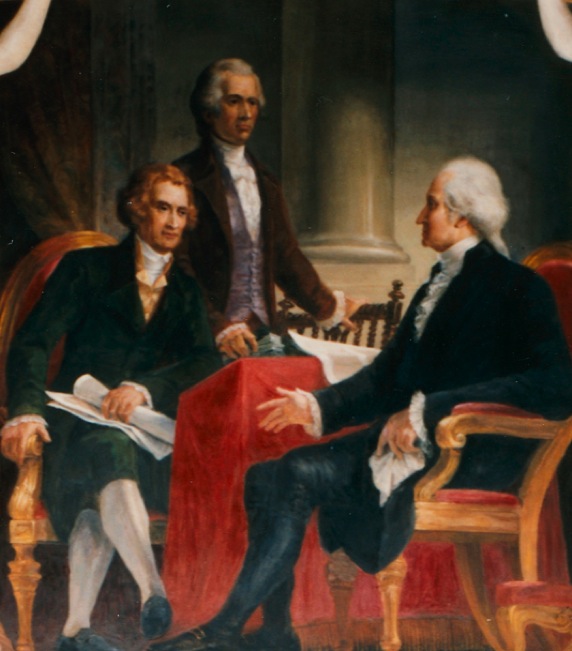 Washington with Jefferson and Hamilton by Constantino Brumidi, 1872, Source: Architect of the Capitol

In December 1790, Hamilton again jolted the nation with his proposal calling for a national bank.  Also patterned after the British financial system, the bank would serve as the primary engine of Hamilton’s overall financial scheme and would allow for a uniform currency, the collection of revenues, the payment of debts, the depositing of government funds, the extension of credit to public and private entities, and for the expansion of the money supply.

While the bank proposal provided a continuation of the debate that exploded with assumption plan, this time there were major constitutional implications.  While the opposition again railed at the impending windfall the proposal would yield for corrupt, dishonorable speculators, they now saw in Hamilton’s bank a threat to the fabric of the Constitution.  A strict reading of the document showed that Congress had no enumerated power to establish a national bank.  The debate centered around the Constitution’s “Necessary and Proper” clause and the extent to which Congress could act to execute its duties.  Hamilton argued that Congress had the right to pass any legislation that was “necessary and proper” in carrying out its enumerated powers, while Madison argued that the powers from the clause were limited only to means that were already enumerated.  Ironically, Madison himself had argued for Hamilton’s more elastic vision of the clause during the ratification debates in Federalist #44.

By February 1791 the bank bill had passed both the House and the Senate and landed on President Washington’s desk.  Washington, a firm believer in adhering to the letter of the Constitution, remained undecided on the measure and sought his cabinet’s opinions on its constitutionality.  In a deliberative fashion, he asked Attorney General Edmund Randolph and Secretary of State Thomas Jefferson for their opinions.  Jefferson expanded on Madison’s view, emphasizing the element of “necessity” in the “Necessary and Proper” clause and that Congress could not assume powers that were merely convenient or useful.  Washington also reportedly consulted Madison, given Madison’s foremost reputation on constitutional matters. 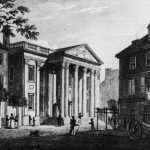 Nevertheless, Washington then turned to Hamilton, submitting for him Randolph and Jefferson’s objections to the bank and requesting a response to their arguments.  In his response, Hamilton expounded on the nascent theory of “implied powers” and on an expansive view of government authority.  His argument would later be enshrined in legal doctrine in the landmark Supreme Court case McCullough v. Maryland in 1819.  On February 24, 1791 Washington signed the bill.  In doing so, Washington willfully endorsed the Hamiltonian financial program.  Washington believed that it was his sacred duty to follow the letter of the Constitution but also endorsed a more elastic view of the Constitution that could allow for a vigorous national government.  The bank, built in Philadelphia, was chartered for 20 years and was discontinued in 1811.

While the Washington Administration laid the foundation for a rising nation, it came at a heavy cost.  Criticism of Hamilton’s policies and open political warfare within Washington’s cabinet would confound his determination to govern above-the-fray.  Before Washington realized it, two factions were developing under his government: the Federalists, led by Hamilton, and the Republicans, led by Jefferson and Madison.